I’ve always quite liked the idea of the great outdoors and seeing a bit of what the country has to offer, but never really felt like I knew what I was doing. I didn’t do CCF or Duke of Edinburgh at school and, as far as I remember, my childhood Scout group was more about lighting fires and playing British bulldog than learning much in the way of scouting skills. Contrast with various university mates, who apparently think nothing of going off doing the OMM, or the Welsh 3,000s, or whatever.

So I thought that it would be nice at least to learn the basics of how to navigate, so that if I go out walking with the family when the kids get a bit older we don’t all get lost. Accordingly, I did a weekend course last Summer in the Peak District with the Silva Navigation School in Tideswell and went back last November for the second level.

However, I still wasn’t as confident as I wanted to be about planning a good route and handling finding the way when all the responsibility was on my shoulders. What I really needed was a bit of practice. So I took a couple of days off work and went back to the Peak District for a wander about. As is evident by the fact that I’m writing this, I made it back. So, to that extent at least, the navigation was a success. But it was not entirely without event.

I’d booked a couple of nights in Rockingham Lodge in Tideswell, a comfortable and friendly B&B that I’d recommend if anyone’s in the area. I drove up on the Wednesday evening and off I went on Thursday morning to Edale to walk my route.

I started out from the main car park in Edale in cloudy, drizzly weather. A fiver into the machine for a day’s parking, so remember your change. I went along the road a little ways in order to get to the path to climb up to Hollins Cross on the Great Ridge separating the Edale and Castleton Vales. Just as I turned onto the footpath, I caught up with a school party, who kindly let me past so I could enjoy the tranquility of some time to myself rather than following them around all day.

Upon attaining the ridge, I turned right, heading towards Mam Tor. 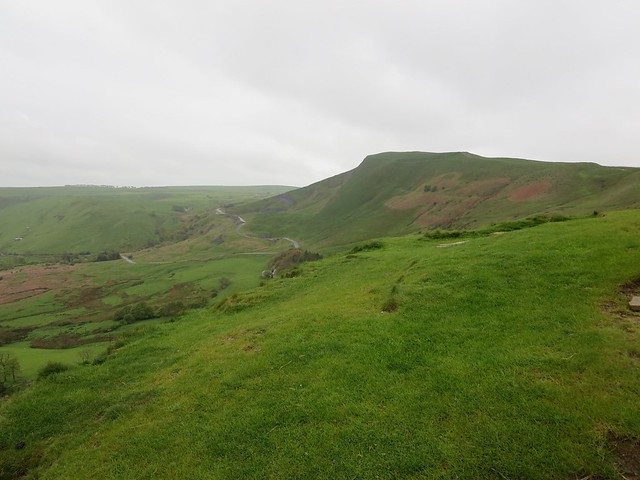 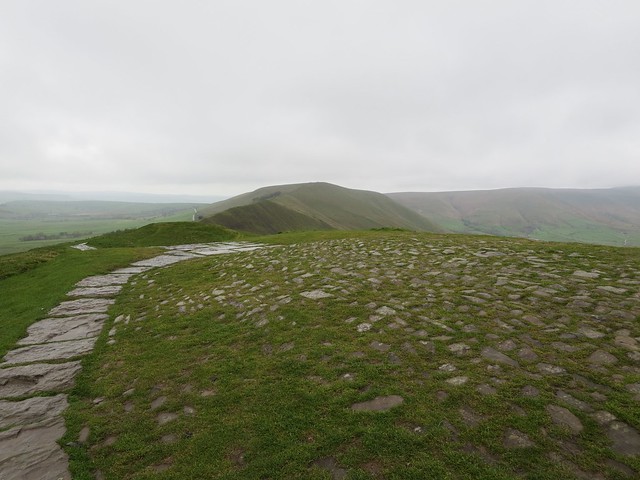 After passing the Mam Tor summit and trig point, I headed down across the road and up again on the other side along Rushup Edge over Lord’s Seat and across the moor onto Brown Knoll so that I could get around the bottom of the Edale valley onto Kinder Scout. This section across to Brown Knoll felt pretty remote and featureless and was the first potential navigational challenge of the route, particularly since I hadn’t seen a soul since a couple of Canadians going the other way had said hello at the Mam Tor summit. The compass therefore came out to check that what appeared to be the track across the peat followed the correct bearing and the stopwatch went on to time the 2.4km before I should be expecting to reach the trig point at Brown Knoll. A few minutes short of the estimated time and there it was, after which it was time to descend to the top of the Jacob’s Ladder path onto Kinder Scout and on up to Kinder Low. 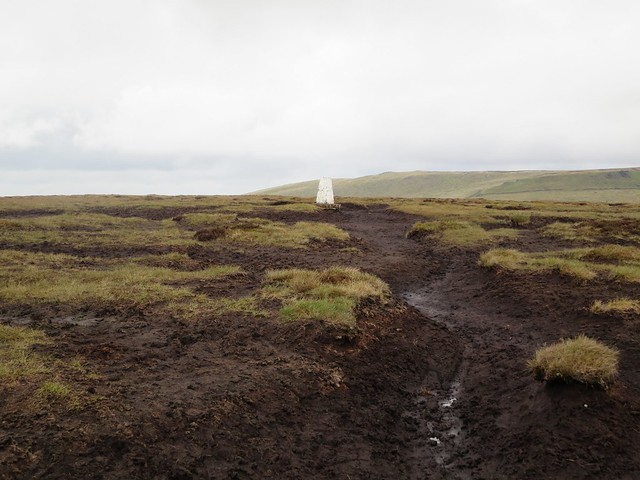 I stopped just beneath Edale Rocks for my second cup of coffee of the walk and a sandwich, also putting my waterproofs on against the rain, which had by now increased from sporadic drizzle to something more significant. A couple of guys passed me coming down a paved path from Edale Rocks – the first people I had seen since Mam Tor. 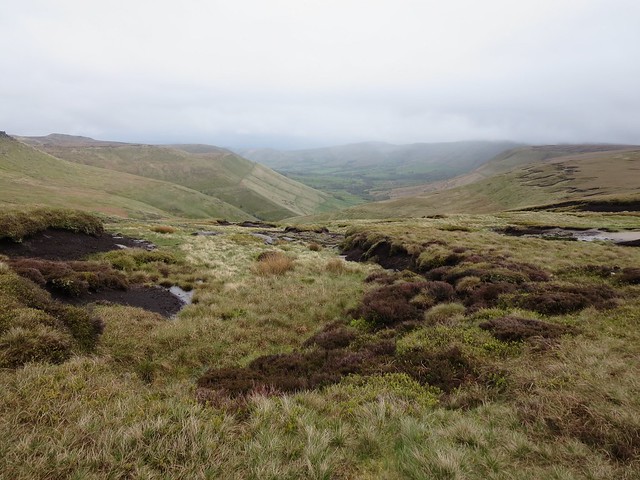 The plan now was to go up to Kinder Low and walk out on a bearing from the trig point to find the 636m summit on the plateau marked on the OS map. I duly found the trig point, sticking up out of an apparently trackless moonscape (this will become relevant later in the story), off to the right of where I had come up from Edale Rocks. 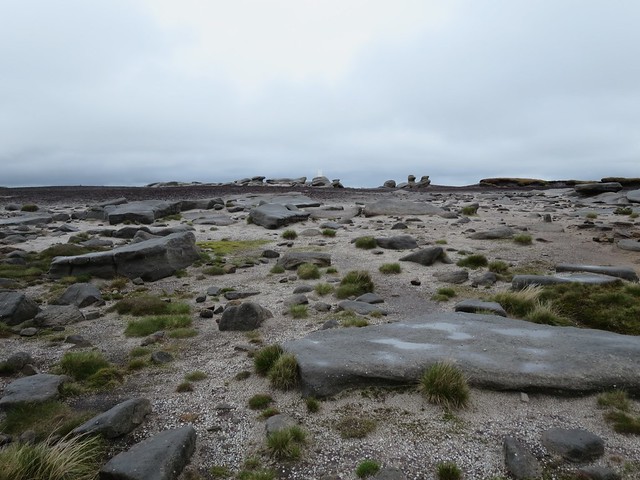 I therefore set out from the trig point on a bearing of 54° and paced and timed to estimate the 750m I had measured on the map to the spot height, checking as I went with a back bearing on the Kinder Low trig point, which remained in view. As I approached the expected position, I spotted a small cairn, approximately on the right bearing but possibly a bit short in terms of distance. I walked to it for a photo. 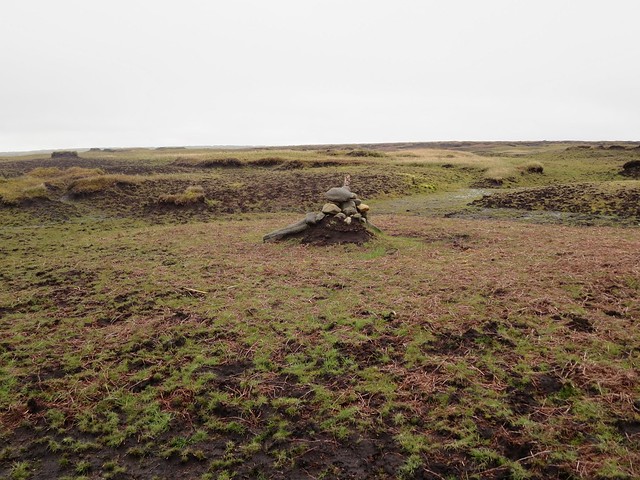 I then experienced how quickly the cloud can come down in this area. The Kinder Low trig point was now rapidly becoming obscured. However, I got back there without difficulty by walking the reverse bearing. 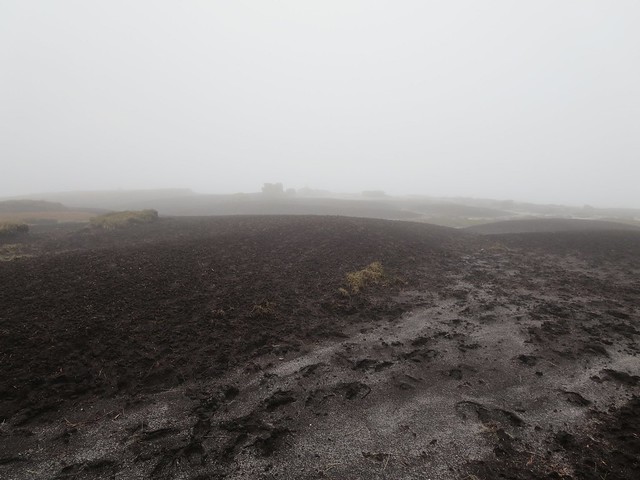 But it was now time for the big mistake of the day. I thought I would walk along the Pennine Way along the edge of the plateau to take a look at the Kinder Downfall before starting to head for home. The cloud was now quite thick and the visibility only a few metres. Nevertheless, I set off in what I thought was the correct northerly direction, following from cairn to cairn until I soon found a paved path which I assumed would be the Pennine Way. What I should have done, of course, was get the compass out again. But blithely heading along the apparently obvious path without doing so, the first alarm bell rang. Another paved path off to the left, heading slightly down and back on itself. Hmmm, that wasn’t on the map as coming off the Pennine Way. Still, I continued along the path for another indication, confident that I could always follow the paving back if it was wrong.

After some distance, I passed a mound with a fence around it (I later worked out that this must have been Kinder Low Barrow). I had ended up going completely the wrong way in the cloud, but hadn’t fully figured it out yet. The path dropped down a little out of the cloud and two more big alarm bells. The land was falling away on my left as expected, but on my right, instead of a plateau, the land was also falling away. I appeared to be on a relatively narrow spur, rather than the edge of a plateau. Secondly, to the right and in front I could see out of the cloud down to a reservoir. Which, of course, according to the map should have been on my lefthand side if I had been where I was supposed to be. Time to retrace steps…

This was the only point in the day where things started to get a little tricky. Retracing my steps back to the Kinder Low trig point involved going back into cloud which by now had become even thicker on the top, with visibility minimal. Despite this, I successfully reattained the trig point by following the paved path and the line of cairns that had originally led me astray, but having done so, I was completely enveloped in cloud and soon not a single feature of any kind, or a path in any direction, was visible. After briefly entertaining a frisson of panic that I would be lost up there forever (it is noticeable that I have started getting serious and stopped taking pictures by this point!), I took a bearing off the map to Edale Rocks and walked blindly out with my compass (and a prayer), counting my paces. Sure enough, very soon, the rocks appeared into view out of the cloud and the expected Pennine Way paved path down towards the top of Jacob’s Ladder was there. Time for a sigh of relief and to get the camera out again… 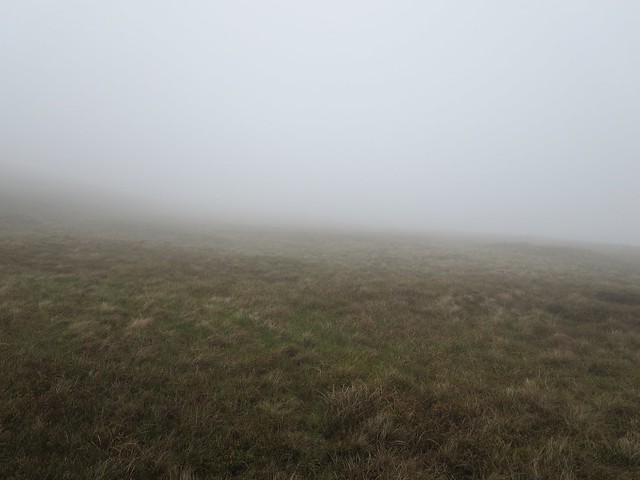 Following that path past the left turn for the southern edge path and taking the next left for the Pennine Way, I soon came out of the cloud again. The cairn at the top of Jacob’s Ladder was shortly within sight. 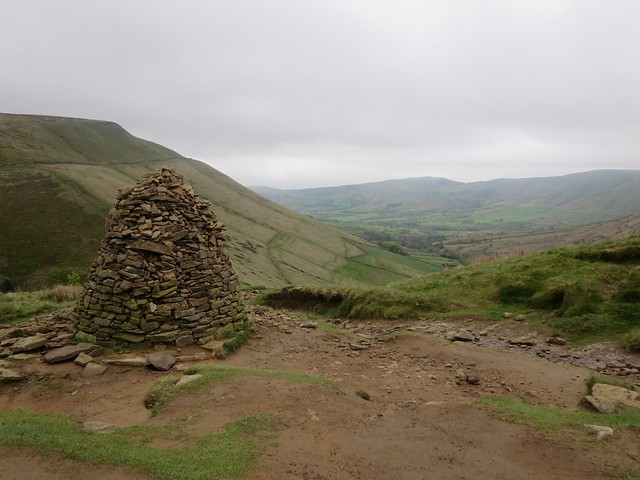 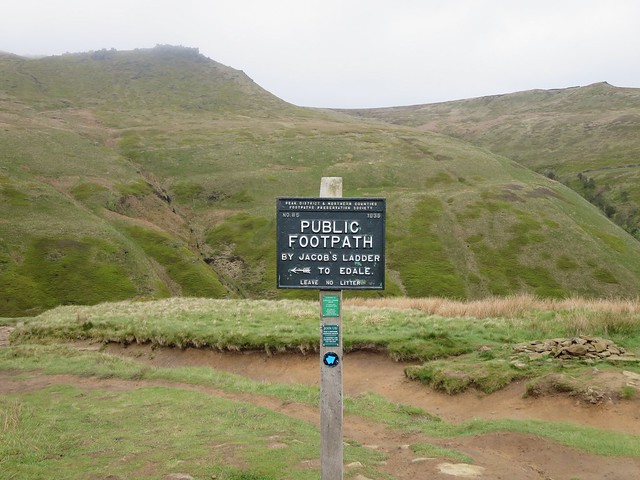 After that, it was an easy stroll along the Pennine Way back to Edale, pausing briefly at the bridge over the River Noe to remove waterproofs. 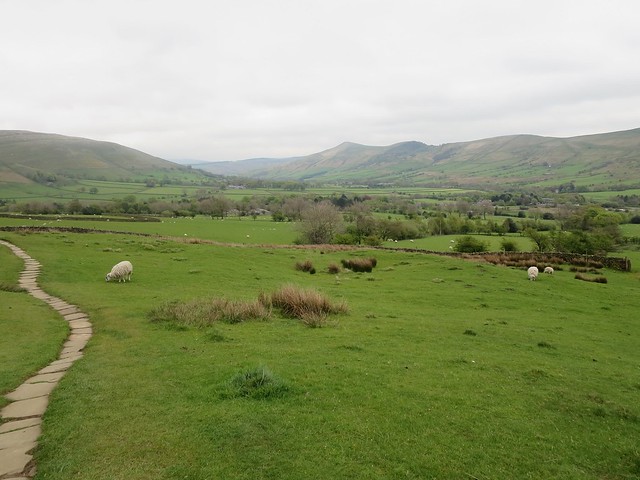 Upon arriving in Edale, there was time for a well-earned pint of Bradfield Farmers Blonde in the Nag’s Head before heading back to the B&B after an enjoyable, occasionally challenging, but ultimately successful day’s navigation practice around the bottom of the Edale Valley, with a few lessons learnt and a bit of confidence gained.

This entry was posted in Diary. Bookmark the permalink.